Hello guys! It has been a while since I posted something. I was burnout however it's finished and i feel refreshed now!

I will explain my bggp3 entry in this post. This post includes how to prepare a simple harness and start an afl fuzz campaign, how to create portable fuzzing environment and root cause of the crash i found. I also have written a Dockerfile to experiment easily what I have explained and done here.

I searched github for analyzer or parser that parses a data format both interesting and complex then found BrainFlow project. BrainFlow is a library intended to obtain, parse and analyze EEG, EMG, ECG and other kinds of data from biosensors. However, my target functionality is not that complex but it does it's work.

I quickly went to BrainFlow's documentation to learn more about it. I had concerns about not having a board to stream data into this library but documentation informs us BrainFlow has also dummy boards to create a valid stream. This is important to progress in the project because otherwise I would create valid structures manually and put them together to test the functionality of the library. Speaking of inputs, quick philosophy time!

My philosophy about finding bugs

To generalize, all systems have inputs and outputs. The important thing is getting a great view of what kind of inputs that target system expects and how it accepts these. If the system fails to validate it's input to process, surely it will crash/break into pieces. Yeah, we call them as bugs. Moreover, when someone finds them and figures out how to take advantage of a bug, it becomes a security issue.

Before diving into finding bugs and throwing gang signs to the community, we need to be sure that it compiles with current tool-chain. To learn if it will be compiled, i just did;

I had crossed my fingers because sometimes projects do not like afl++ and newer llvm tool-chain, sometimes the target can be old and can't keep up with current. I did not configure or enable other instrumentations other than defaults, there are many opportunities to find out what afl++ provides but this post is not covering additional options
(for ex: laf-intel and REDQUEEN can help to bypass hard multi-byte comparisons).
To learn if instrumentation is applied to binary and it is compiled with correct tool-chain, I usually (not proud of that) check with strings and it will be likely this;

The instrumentation is very important because coverage guided fuzzers need feedback. If the library itself is not instrumented, even the greatest harness wont go through numerous paths without feedback.

Build a program that uses BrainFlow

To play with the library, I checked Code Samples section in the documentation especially C++ tab. While trying to understand the examples, I saw my first fuzzing target in C++ Read Write File example. Eureka!

I was feeling lucky because my first primitive fuzzer can test this functionality and the snippet is easy to alter to a harness. Even it would find no bugs, I would run this harness and in the meantime I could learn more about it. However, it was enough to find a bug. I turned this snippet to something that gets a filename as an argument. On the other hand, I could manage to create a valid data in valid TSV format with dummy board. Thus, I got a valid seed to start with. Changed snippet below (full code is in brainflow-fuzz repository named as harness.cpp);

Not to manually write all files that the binary needs while compiling, i've created a rule in Makefile with trials and errors;

Spin up the fuzzer! 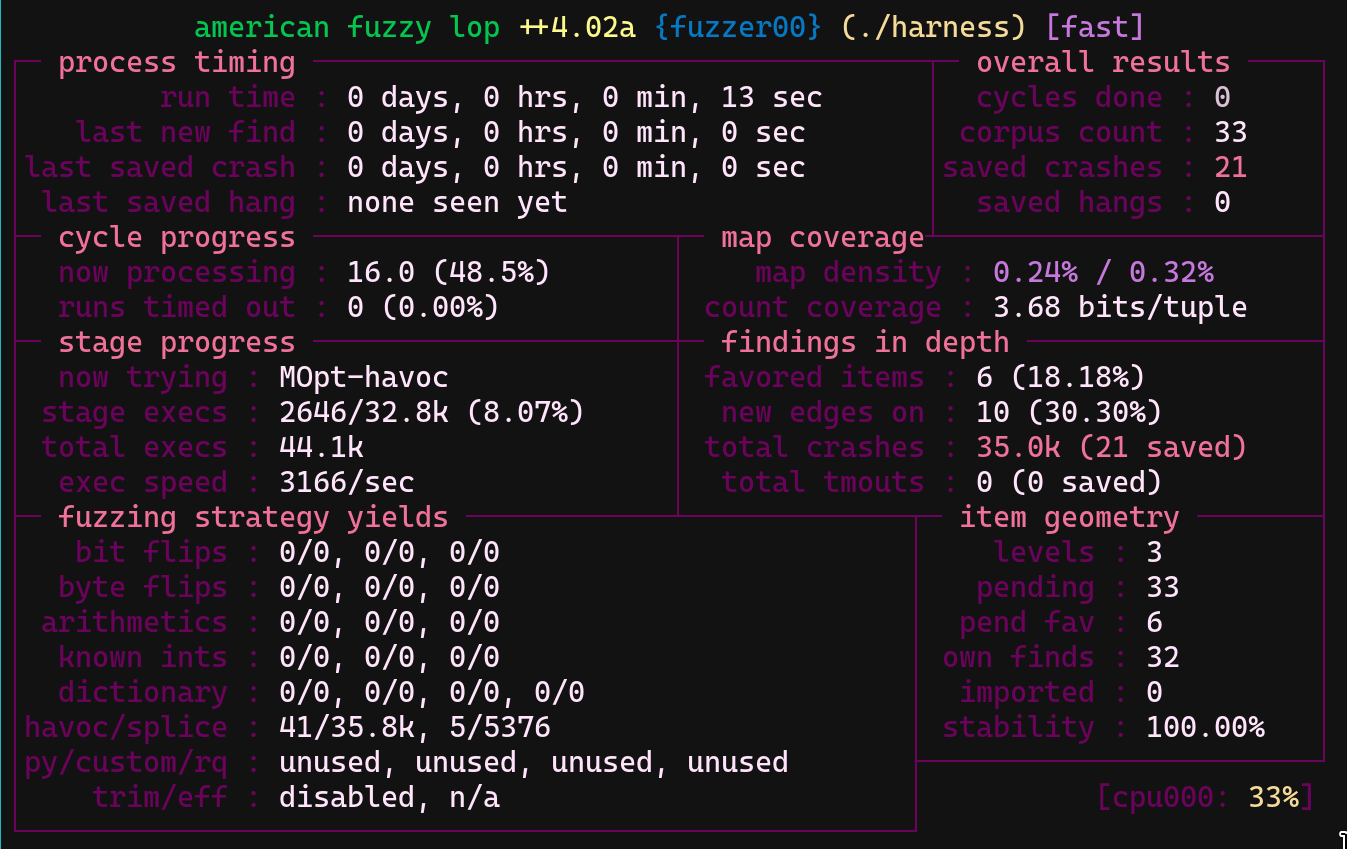 Whenever the fuzzer started, crashes started to show up immediately. Usually, when it acts like that, I assume that my harness is a trash. However, when I started to try crasher inputs manually, I found out some of them could manage to crash read_file function for real.

Some of them also crash when it is given through python too. (STATS.md) Interesting crashers inputs table is below; 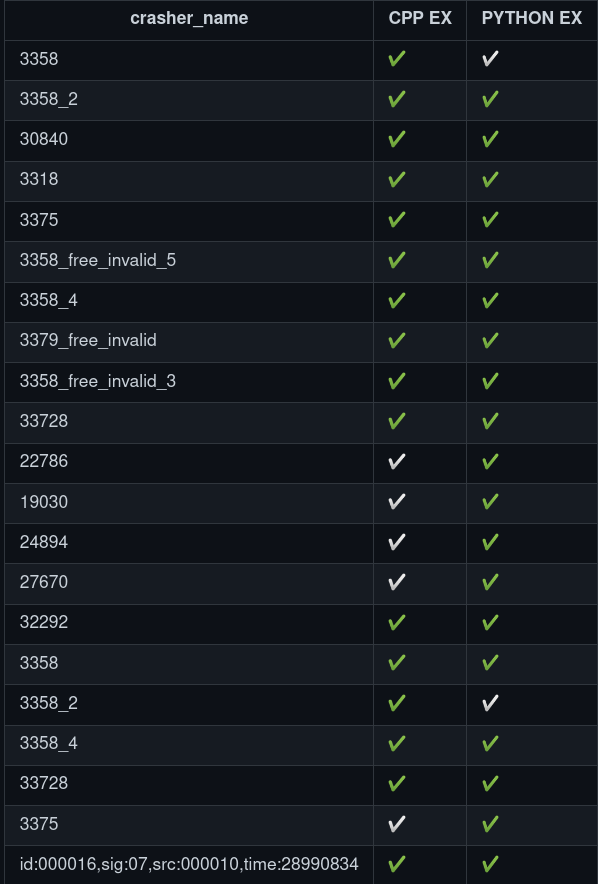 Before finding the root cause

With quick analysis, I determined that at least 2 different bugs occur with these inputs. On the other hand, the produced inputs were way too big for bggp3 and at this point I was lost. The corpus could be minimized with afl-cmin (usage ex: afl-cmin -i samples/ -o min -- ./harness @@), this tool also could reject redundant files if i had more than one.
(To modify the files, afl-tmin can be used too)

I was done with this laziness and started to delete the records and big numbers. While I was processing manually, I realized how dumb I am because these columns are nothing but just numbers. I spun up another fuzzer with an empty seed and continued to manually build the rows and columns. After a long time, I single-handedly proved infinite monkey theorem and found minimalist crash with a file that has inconsistent columns. 14 byte input below; 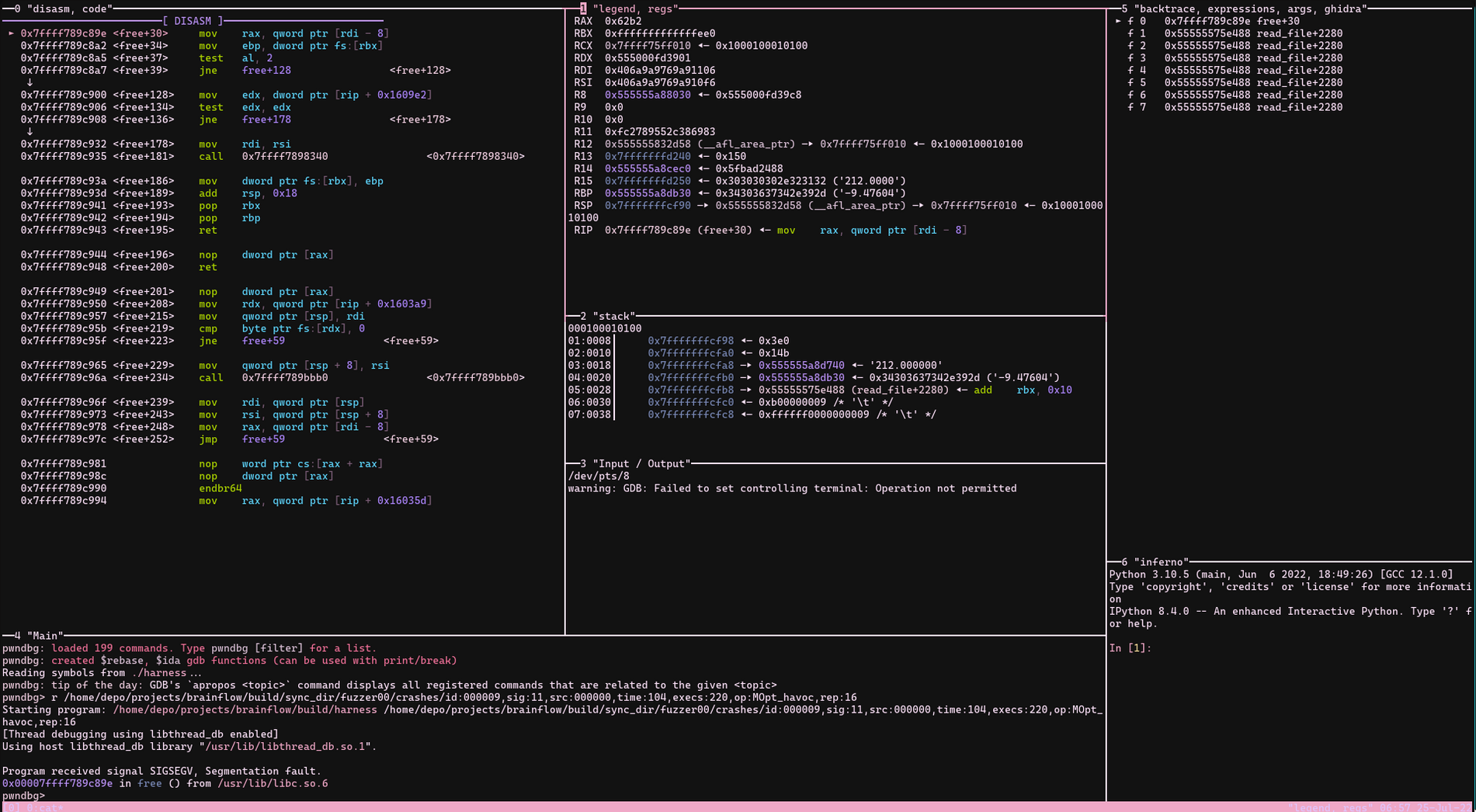 I already decided that it must be related with inconsistency between first column count and others. I opened my gdb and source code (data_handler.cpp) and put them side by side then "ni" session was started!

A lot of fix are available, it can be applied to total_cols line or before. At this point, it was early in the morning and I hadn't sleep at night and stopped here. So, I decided to open an issue and show my results to the developer, while thinking that it would take time to analyze these crashes. However, the developer acted quickly (well done! 👏 ), had fixed the lines until I woke up.

After all, I feel happy to help open-source community and got something for bggp3. Actually, I wanted to fuzz a target requires more work but I may have no time to complete it in time. I hope you guys enjoyed it and easily followed the write-up.
Thanks to @netspooky and his encouragement.


(In brainflow-fuzz repository there are more crasher inputs to try)

Thank you for reading my write-up! Have a nice day absolute legends! 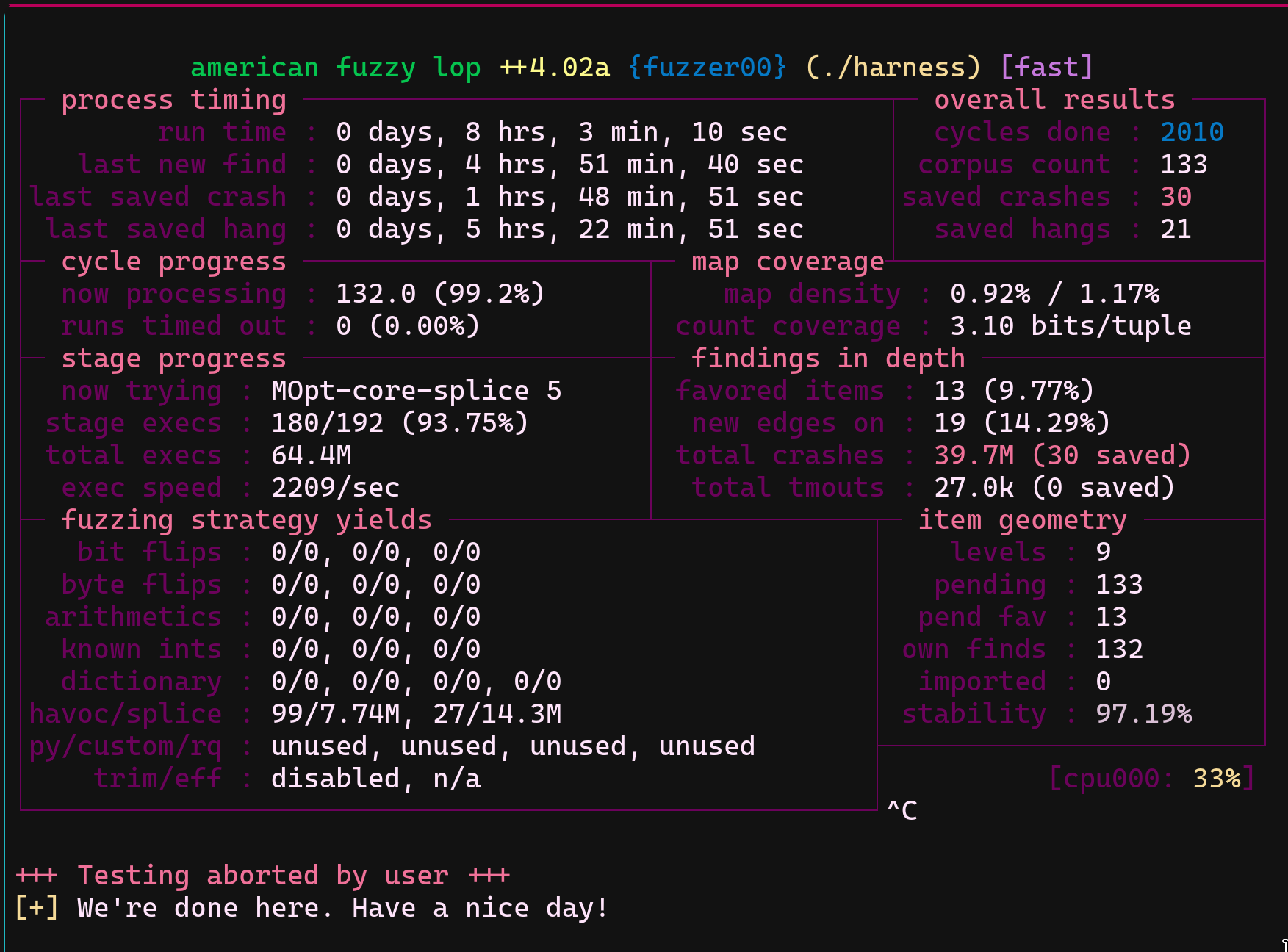